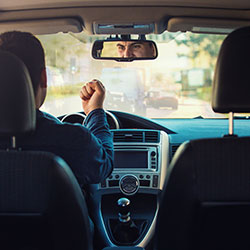 New study suggests Orangeville, Bradford and Woodstock drivers are more likely to admit to having the tickets, collisions, or a combination of the two on their driving record.

Nobody is surprised that tickets and at-fault collisions affect your auto insurance rate, but you might be surprised to learn that these two driving no-nos are more common with drivers living outside of Toronto. According to a recently released study, drivers in Orangeville, Bradford, and Woodstock admit to having more than their fair share of tickets, collisions or a blend of the two on their driving record.

The study, released by InsuranceHotline.com, is based on the details entered by drivers while getting Ontario auto insurance quotes since 2018. Specifically, the study looked at three categories for each city: percentage of drivers with at least one ticket, percentage of drivers with one or more at-fault collisions, and drivers who had at least one of each. The numbers were than further crunched to come up with a grading system. Here's how it all breaks down.

The Top 10 Worst Cities in Ontario for Driving

The Top 10 Best Cities in Ontario for Driving

Even though the study discloses that the tickets and collisions admitted to could have occurred in the driver's hometown or anywhere their wheels took them, there are some interesting numbers about Ontario drivers as a whole.

Almost 7 percent (6.9%) of drivers in the province admit they've been ticketed for a moving violation in the last three years. Yet, there are nine communities where drivers admit to having a ticket (but no collision) where the percentage reaches into the double digits:

Almost 9 percent (8.9%) of drivers in the province admit they've been involved in an at-fault accident (but have no tickets) in the last 10 years. In the following communities however, this average is exceeded by three full percentage points:

One of Each: At Least One Ticket and a Collision

While having one or the other on your driving record could affect your premiums, having at least one of each surely will. Fortunately, only 3.5 percent of Ontario drivers fall into this category. Yet, in in five Ontario communities this average is nearly double:

How Long Do Tickets and Collisions Affect Your Car Insurance Rate?

For fear of stating the obvious, steer clear of tickets and collisions to keep your auto insurance premiums in check. The reality is, however, they happen to even the best drivers sometimes. If it happens to you, a ticket may affect your premiums for three years and an at-fault collision for at least six. Fortunately, according to this survey, most drivers need not worry.