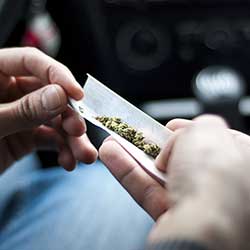 It's usually alcohol we think of when the topic of impaired driving comes up, but with the legalization of cannabis, drug-impaired driving is a focus now too. It's a discussion, however, that likely should have started years ago as driving while high, according to a variety of studies, is all too common and has been for some time.

The fact is, with the drug's new-found legalization, the issue of drug-impaired driving is finally getting the attention it deserves. According to the Canadian Centre on Substance Use and Addiction, the percentage of Canadian drivers killed in collisions who test positive for drugs now exceeds that of drivers testing positive for alcohol. Sadly, this comes as no surprise given the results of several recent studies.

Statistics Canada: 14 per cent of cannabis users have driven high

According to Statistics Canada's most current quarterly National Cannabis Survey, 14 per cent of cannabis users with a driver's licence admitted they got behind the wheel of a vehicle within two hours of consuming the drug.

Insurance Bureau of Canada: 13 per cent of Canadians have driven under the influence of cannabis

Similar results were found in a recent survey undertaken by Leger on behalf of the Insurance Bureau of Canada (IBC) and released at the beginning of October. The survey found that 13 per cent of Canadians have driven under the influence of cannabis.

CAA: 1.9 million Ontario drivers have gotten behind the wheel while drug-impaired

An Ipsos study, commissioned by CAA and also published in early October, found that 1.9 million Ontario drivers have driven under the influence of cannabis; while 735,000 have done so in the last three months.

Tackling the problem of drug-impaired driving in Canada

In general, impaired driving in Canada has decreased annually for each of the last six years. Last year, for example, there were four per cent fewer police-reported instances of impaired driving (69,000). However, this decrease is a result of fewer drunk driving violations, which account for 95 per cent of all impaired driving reports.

These two initiatives, the increase in police offers trained to spot drug-impaired driving and the approval of a roadside testing device, have come about in the last year due to the legalization of cannabis in Canada.

The reality of driving high

For drivers who take to the road after smoking up, the reality is that there's a higher likelihood of getting caught than ever before. And because impaired is impaired, no matter what the means, the penalties are significant too: licence suspension, fines, vehicle impoundment, criminal charges and jail time are all possible if you choose to drive while high.

An impaired conviction, whether due to alcohol, cannabis or a combination of the two, will also follow you for years when it comes to your auto insurance with premiums that are significantly more expensive.

Everyone knows not to drink and drive and the same logic applies to cannabis use. Whether you designate a driver, call someone to pick you up, stay the night, take public transit, or call a taxi/ridesharing service, there are no excuses for getting behind the wheel while impaired.